The City of Bath lies in a valley surrounded by seven hills. These are largely limestone, the hill of Combe Down  being quarried extensively  to provide stone for the Georgian buildings which now confer World Heritage status on the City. Other smaller quarry sites are evident on the hill of Odd Down. Quarried stone has been used at least since Roman times for building and road construction.

The Tufa Field is approximately 0.9 hectares in area ( about 9000 square metres) , with a roughly trapezoidal perimeter, approximately 150m at it’s longest boundary, with an average width of 66m .

Our site contains two major deposits, split along it’s length. The southern half of the site extending about halfway to the North is a layer of Fuller’s Earth mudstone while the northern half is Fuller’s Earth Rock Member. Fuller’s Earth is a well known feature of the Bath area, being commercially mined until the late 1970’s. It is highly water-retentive and forms an effective aquifer making for complex hydro-geology at the site. It is probable that this layer ‘powers’ the springs lower down the hill, at Moorlands Schools, the Moorlands Park, the Oval green space and at various other points along the boundary layer with  the more impermeable limestone material in the adjacent slope. 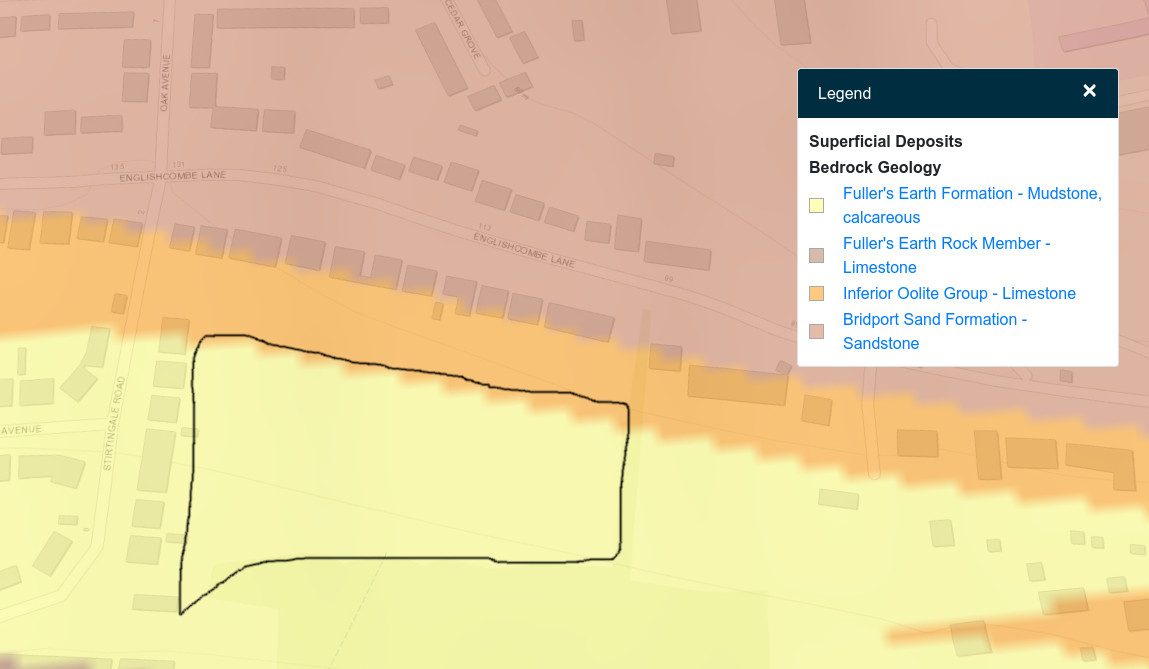 The BGS Survey of 1984 for Bath City council clearly identifies the mudslide areas on the southern slopes. The Borehole data confirms the unstable nature of the upper layers to the borehole  depth of 6 m. The Borehole is located at BH3 on this map. The borehole information confirms the strata boundary shown on the BGS map, i.e. to the north is stable ground, to the south of the boundary edge is unstable.

This report contributed to the abandonment of building plans in the 1980’s.

The ability to effectively store large amounts of water provides a significant buffer to mitigate flooding in the main Avon valley. The increased flood risk to Moorlands Schools when the Tufa Field is developed is highlighted by this map,. For existing residents in the surrounding area, there is always concern for land movement. The sub soil structure to a significant depth contains large quantities  of yellow clay ( mudstone). This is subject to shrinkage and expansion, according to water content, and , in extreme circumstances, slippage. As the clay dries in summer, shrinkage takes place, leading to subsidence. In winter, when runoff water from Odd Down is absorbed by the mudstone layer, the clay expands, causing ground heave.

Section through upper layers of Mudstone

Examination of the section from an adjacent garden excavation reveals the nature of the mudstone. In general, consolidated stone pieces are in the size range 2-10cm. Some layers are recognisably stratified, 1 to3 cm in thickness, with silt between. Constant drying and wetting of the silica layers has caused the stone layers to fracture, so silt has also accumulated in the fracture planes.

The silt/clay layers are notable for their changing viscosity with water content. In very dry times, the clay shrinks markedly, reducing support for the stone layers. As water content increases, the clay expands and becomes very viscous, adding stability to the layers. This is the ‘normal’ state of the mudstone. But as water content increases further, the viscosity drops rapidly and the clay acts as a lubricant for the stone strata, allowing movement to take place. As the hillside slope increases, these layers become mobile, leading to the observed mud slumps in the field.

Occasionally there are pockets of just clay, some exceeding 50cm depth and 50cm radius. These have no structural strength and need to be eliminated during groundworks.

Building on such land, especially where there are discontinuous layers, has to be designed very carefully, and may require stabilising raft foundations or piling  to prevent land movement damage to buildings over time. While these measures are possible, the cost of doing so is very high.

Carrying out these extensive groundworks is also difficult. Heavy machinery may not be easily deployed in a sensitive site and there remains a great danger that the works cannot be practically undertaken without great damage to the site.