The first conversion of the Tufa Field to building land was proposed in 1983, with Bath City Council granting itself permission for a sheltered housing scheme. 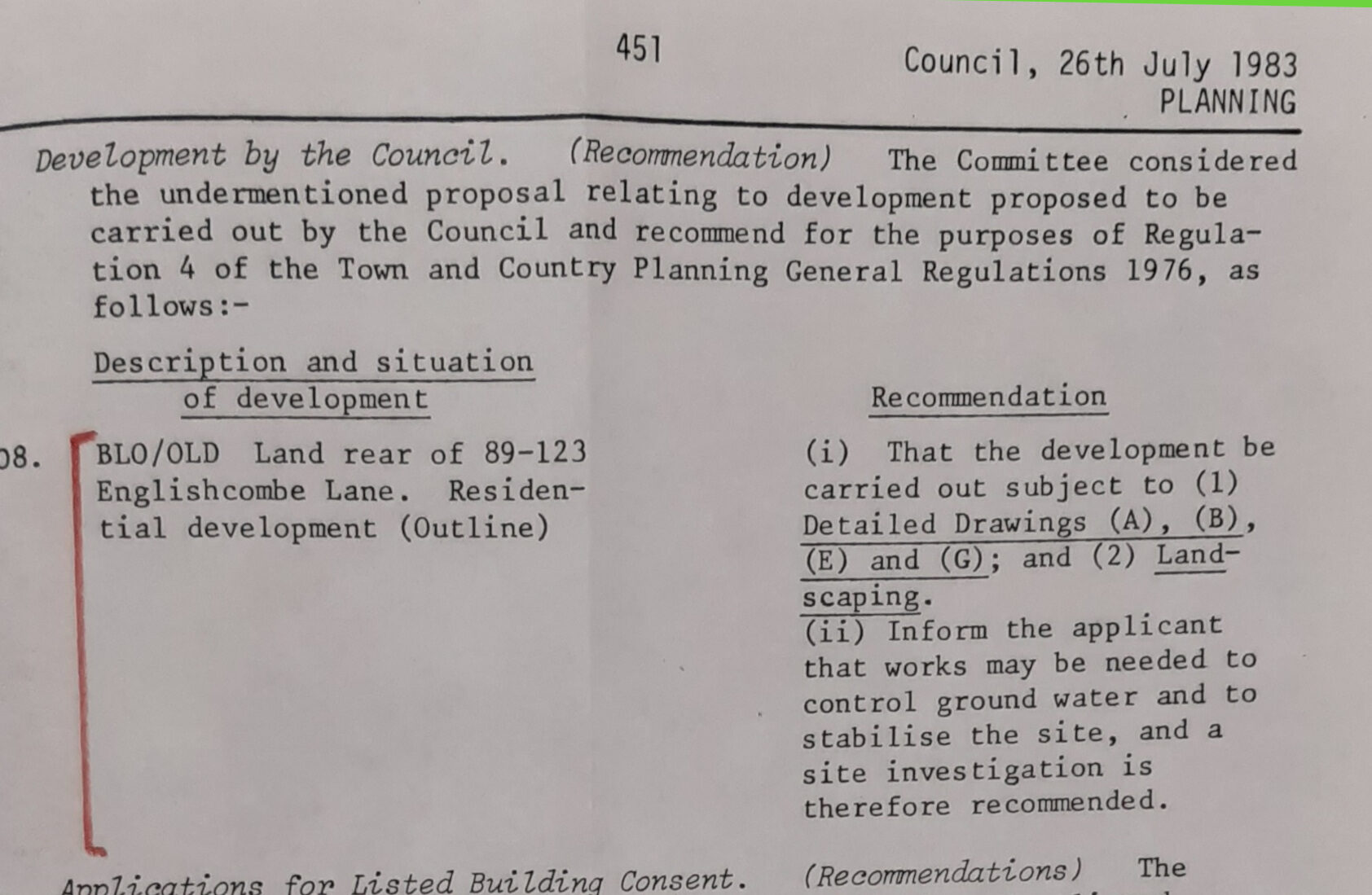 Even in this original application, the stability and drainage of the site was highlighted as a concern.

Shown here is the land required to provide vehicle entrance to the site, to be purchased from the plot landowners. These compulsory purchase orders were implemented, some have since been waived. 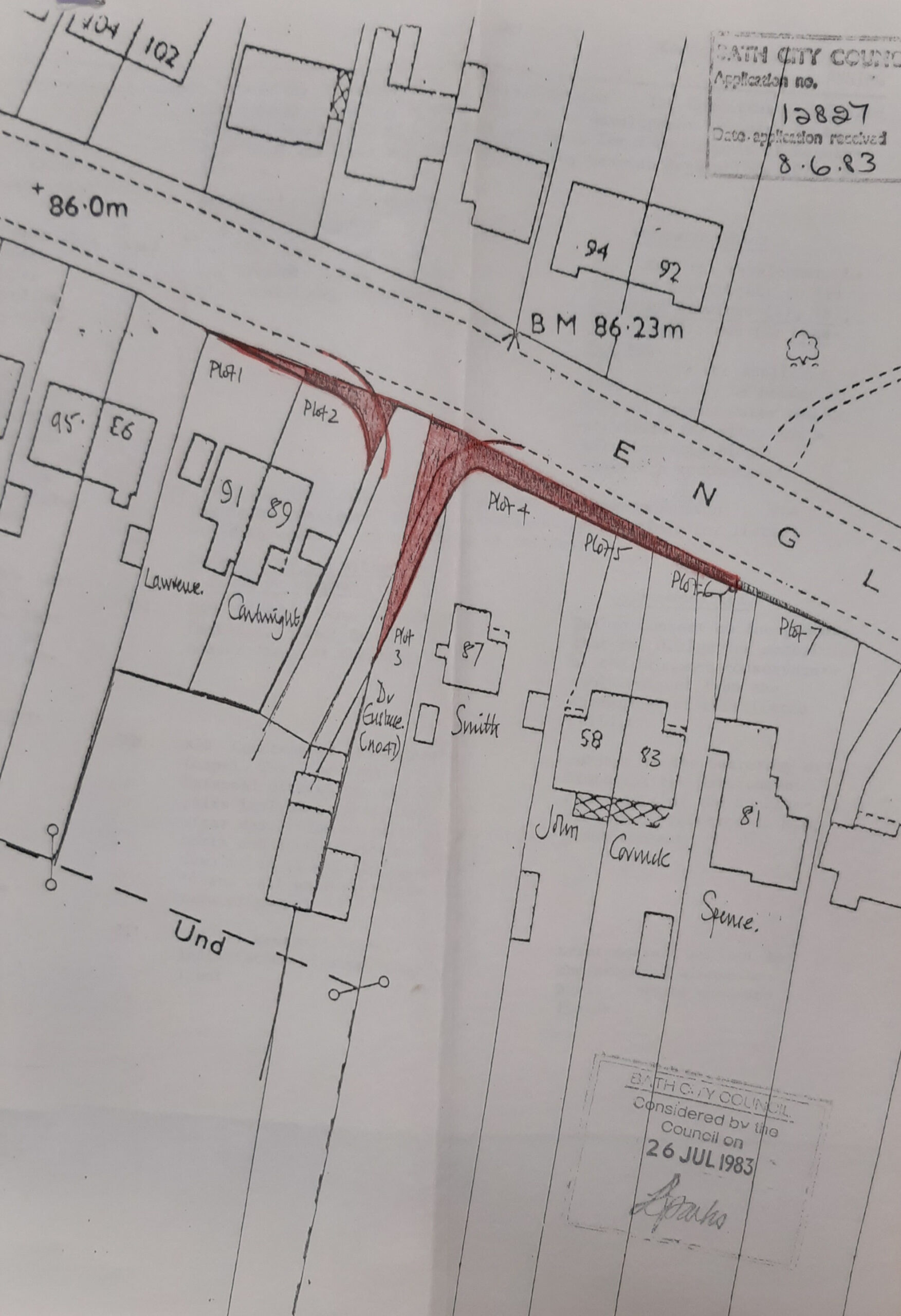 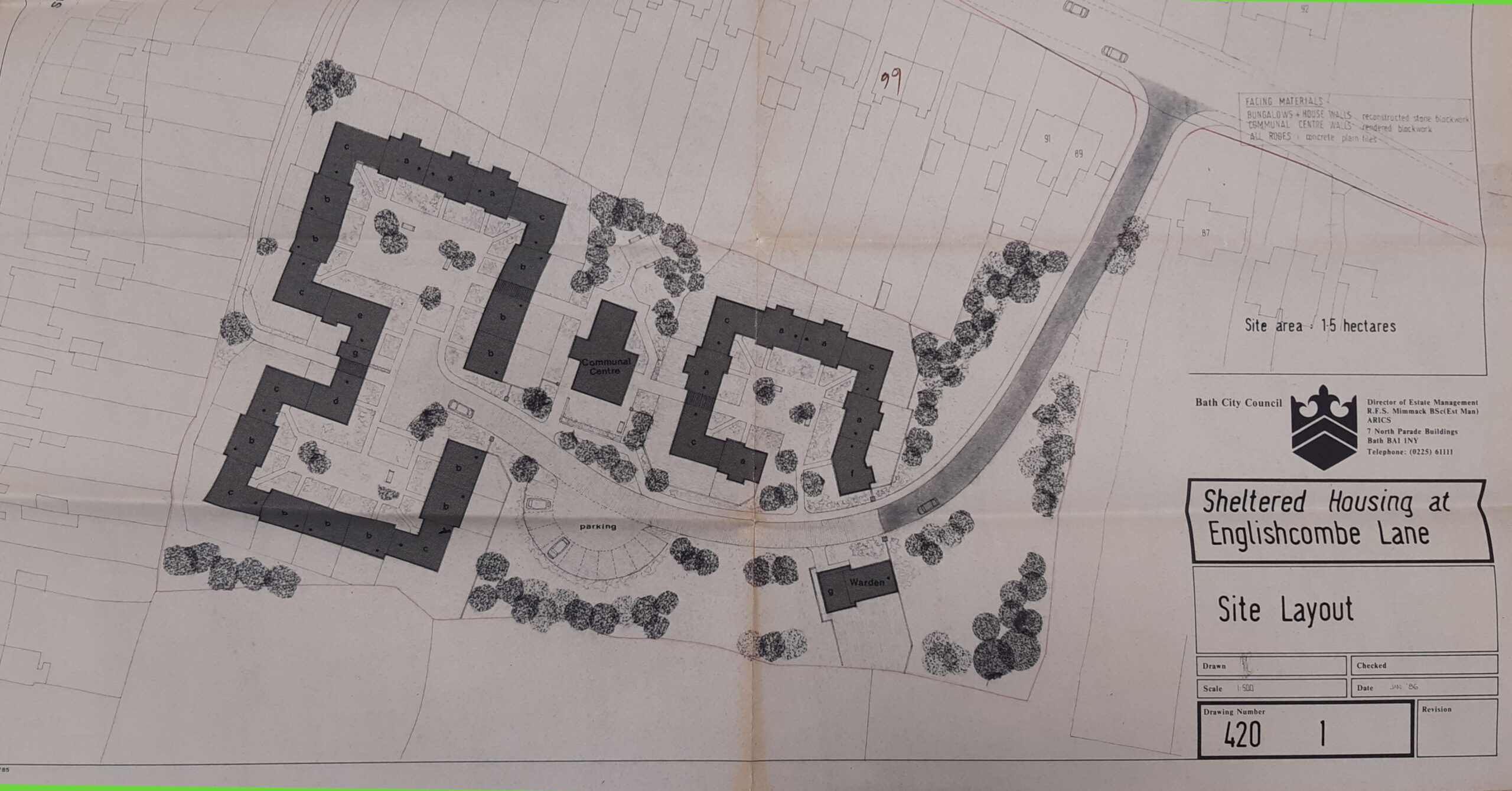 By the end of 1986, it was clear that the difficulties to stabilise the site and deal with drainage issues were likely to  incur large costs.

A terse minute from the Housing Committee of December 1986 simply records that “The Committee recommend that no further steps should be taken in preparing a scheme for the development of this land for housing purposes at this time.”

As for the reasons, we can only infer from the preceding paragraph in the minutes.

“Referring to Minute No. 1 on page 169 of the 1986 printed minutes, The Director of Estate Management*  submitted a report (i) on the continuing problems in providing a satisfactory scheme for the development of this site for sheltered housing accommodation due to the unstable nature of part of the ground; (ii) appending a report by the City Engineer on the various investigations carried out to the ground conditions since 1983, and the conclusion now reached; (iii) indicating that the scheme for which planning permission had been granted would need to be further revised, and (iv) on a proposed revised scheme with details of costs, and start and completion dates”. 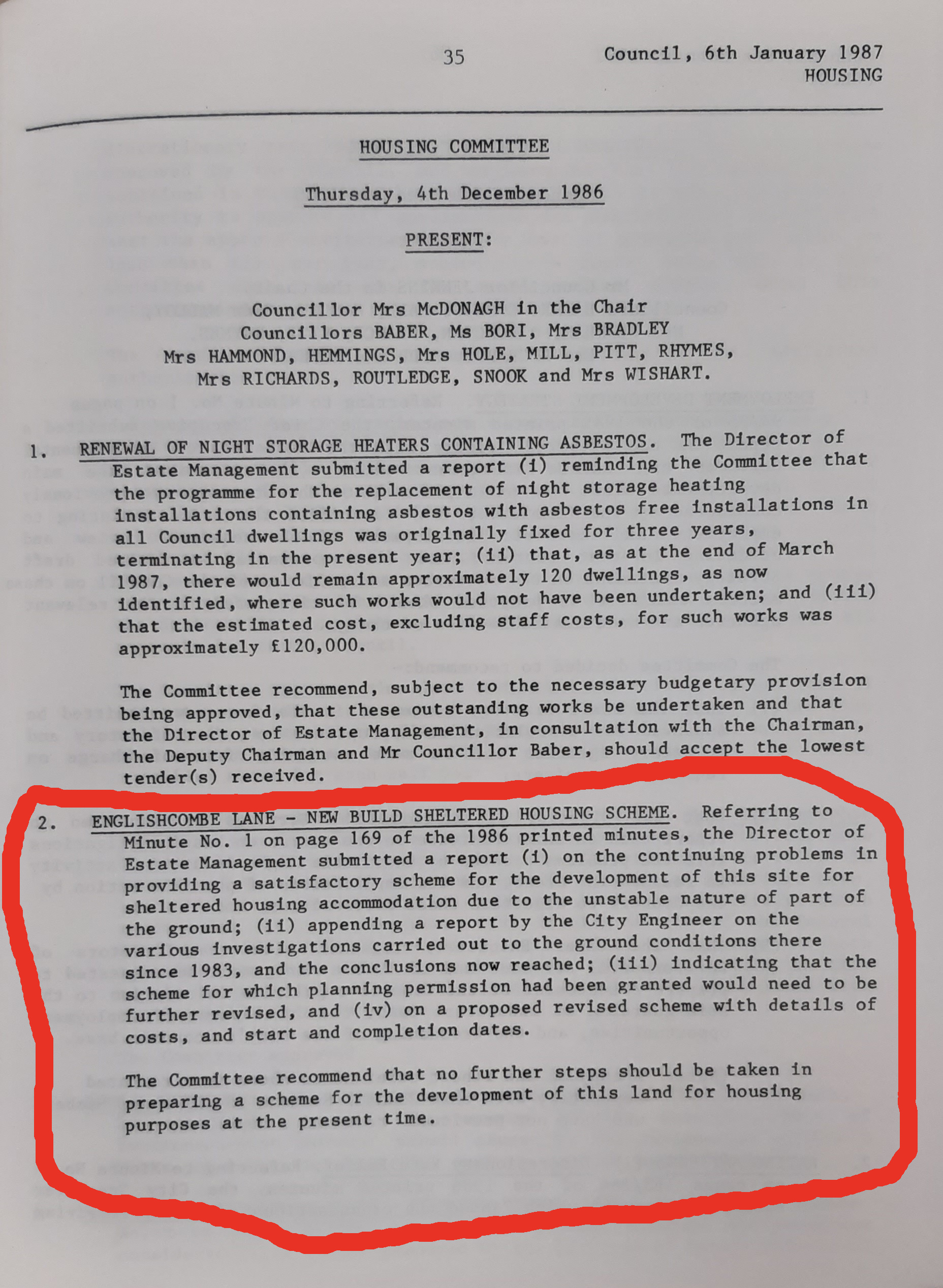 It has not been possible to trace the reports mentioned in the City Archive, they may no longer exist. It is likely that this Geological Survey formed part of the report and that the costs incurred then and likely to come were excessive.

Local residents were informed by Councillor Brian Roper of the decision to abandon the scheme in a hand-crafted note of the time. 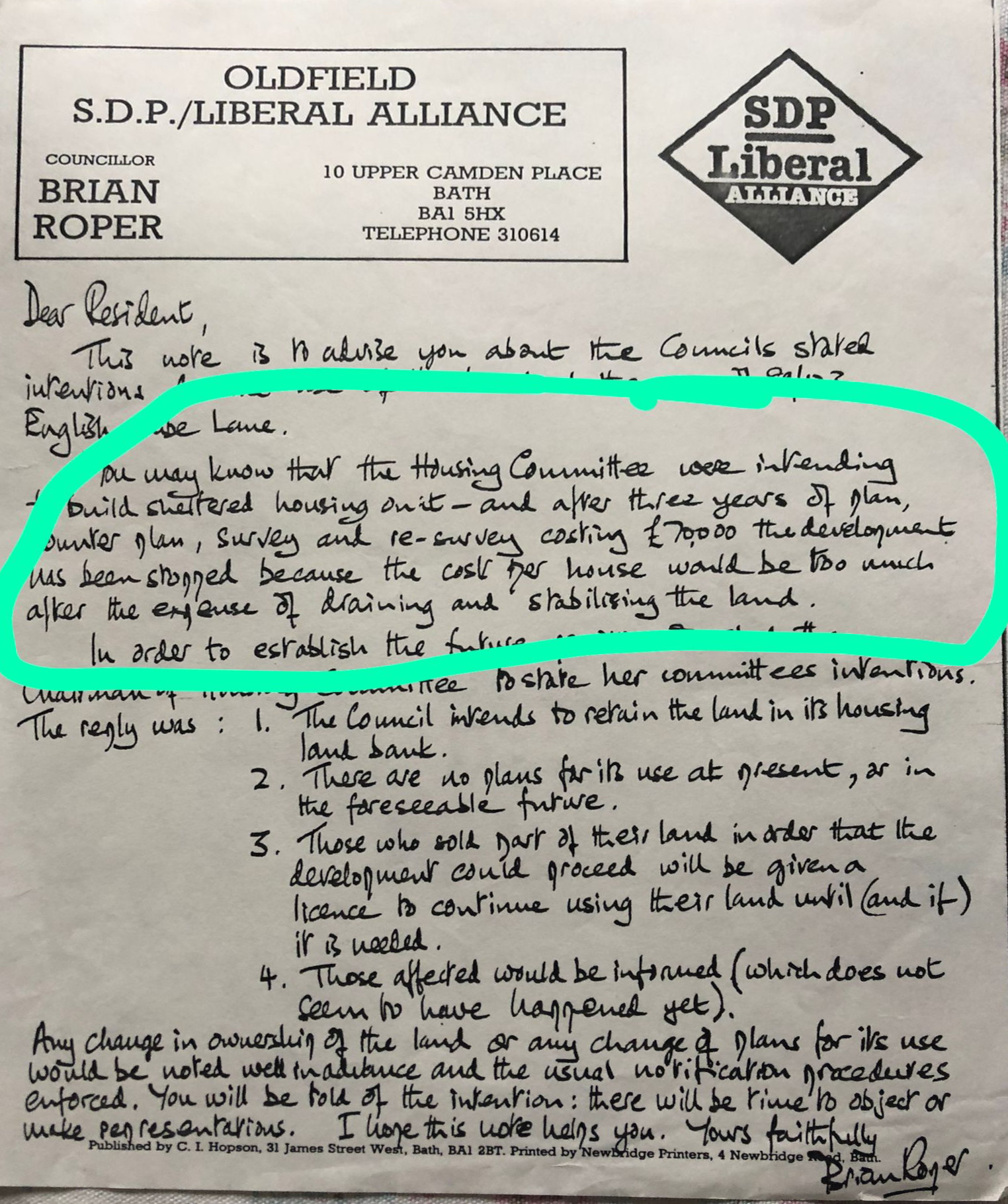 The lessons are clear: considerable time, effort and expense has been incurred previously and there is no reason to expect that re-visiting the problem will change it. The Tufa Field should be accepted and cherished for what it is – a valuable green space in a time of ecological emergency that must be kept for everyone’s benefit.